The Gift of Joy and Normalcy

The day began with joy – and also with hesitation.

Following weeks of attempting to contact 600 Momentum sisters in Russia and Ukraine to ask them about their safety and wellbeing, and to see how Momentum could help, Momentum convened a group of Ukrainian and Russian women in Israel – all of whom had recently fled their countries and made aliyah – for a special program designed for them. To get to Momentum’s meeting point, many navigated their way on Israeli transportation for the very first time.

Alongside Israeli Russian-speaking Momentum sisters, the day featured a visit to Jerusalem’s Skizza Gallery and Cultural Center, which was founded by immigrants from the Former Soviet Union, as well as a cooking class during which the women tried out local recipes of their new home. The women also took part in learning led by Momentum Trip Leader Dr. Shulamit Kopeliovich, which gave them the opportunity to share their stories, and reflect on how they currently relate to Momentum’s Core Values.

Most importantly, Momentum’s program gave the women a much-needed opportunity to step out of their refugee status for a day, invest in their souls, and experience sheer happiness.

“The woman could not believe that we found them and that they were able to be part of a Momentum experience again,” said Anna Vainer, Momentum’s Senior Partner Relations Manager for CIS & Europe, who organized the program and felt personally connected to the experience, having immigrated from Kyiv, Ukraine 30 years ago.

Yet, at first, the Russian women worried that the Ukrainian women might feel animosity toward them and blame them for the war. But their fears soon evaporated.

“There was a feeling of love and of being on the same side of the story – as Jewish women and as mothers,” said Anna. “The Ukrainian women told the Russian women that they loved them and the tension immediately disappeared. At the very heart of the day was the opportunity to connect with one another. Israeli Russian-speaking sisters welcomed them, offering immediate help, and extending friendship and support.”

Each woman had traveled many miles and endured many challenges to arrive in Israel. The Ukrainian women escaped terror at home, one woman sharing that, with only 10 minutes to pack, she took just a backpack and a pair of shoes. Another woman who took a bus across Ukraine shared that the community rabbi handed out adult diapers to the passengers because they would need to drive for 35 hours without making any stops. At each checkpoint, the Ukrainian women feared for their lives.

Appalled by what was happening in their country and in their name, the Russian women had scrambled to leave their country. They left their comfortable lives, even while unable to access their money because the war contradicts the values they want to instill in their children. While words such as “repression” and “propaganda” frequently came up in the sisters’ discussion, “support”, “generosity”, and “gratitude” were repeated ten times over.

“Momentum made this day happen because we believe in being there for one another. Mutual responsibility is one of our core values – and there is no better way to show it than being there for our sisters during challenging times,” said Anna. 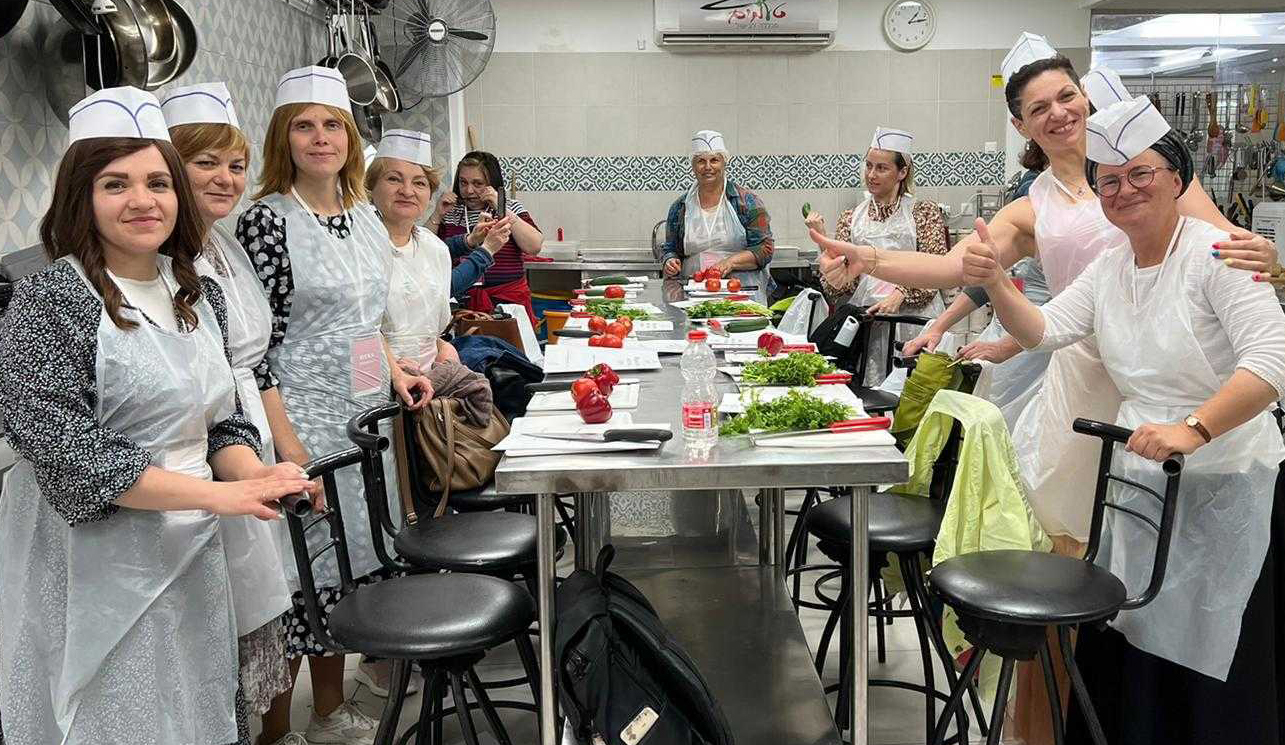 The gift of giving

As difficult as the women’s stories were, each shared how much support they received from Jewish organizations and Israel. They had left their entire lives behind, and received food, housing, furniture, and help in navigating Israeli society.

At the Momentum program, they were given the gift of normalcy. “For a brief moment, we helped them leave behind the overwhelming work of getting their new lives together, and gave them a glimpse into what their lives used to be like – and what they could be like once again,” said Anna.

The women also shared their own commitment to giving back and helping their communities. One Momentum sister remotely manages a team of “Chesed” workers who care for the elderly in her bombarded city, another provides free mental health consultations to refugees, and another coordinates the delivery of medical supplies to Ukrainians who have severe medical conditions.

“It was empowering to see how these incredible women find strength in helping others,” said Anna.

There were also projects set up by Israeli Russian-speaking Momentum sisters, including those that brought the refugees food and helped them navigate local authorities.

“To say that they have been responsive to Ukrainians’ needs is an understatement,” said Anna. “They, too, understand what it’s like to leave everything behind and are filled with Israel’s giving spirit.”

Embraced by a movement

The Momentum program ended with the Ukrainian and Russian women joining a MOMentum Trip’s final Momentum Event, alongside 400 Momentum sisters from seven countries across the world. Together, the women danced and sang “Sallam” (Peace) – a song that seemed to take on a whole new level of meaning. The new immigrants were acknowledged and embraced by each Momentum sister – and a movement of women.

“One Ukrainian woman told me, ‘This is the first time that I’ve allowed anyone to take my picture in two-and-a-half months.’ She finally felt that she was experiencing something that was worth capturing,” said Anna.

As French women spontaneously belted out “Jerusalem of Gold” on the bus ride back from the event, one Ukrainian woman said, “I can’t believe there is still a world where women experience MOMentum Trips. It feels like a parallel universe and it’s so good to know it exists.”

This program was only the beginning. Momentum hopes to create more experiences for Russian and Ukrainian women in Israel, giving them repeated opportunities to connect with their Israeli Momentum sisters and each other, learn, reignite their souls with joy – and feel like themselves again.