An experienced teacher gets a new lesson

Michelle Meyer knows a lot about Israel. As a synagogue administrator and former Hebrew school teacher, she’s taught hundreds of students all about Israel – but until this year, Michelle had never set foot in the country herself.

“I remember the first time that we came through the Jaffa Gate in Jerusalem and we turned that corner, I instantly was struck. I felt like I’d gone back in time.”

Other parts were more surprising. The Western Wall? A bit smaller than she expected, Michelle admitted. “But I found myself looking at the birds. They kind of burrow into the Western Wall in these little niches,” she said. “And I thought, it’s amazing, these birds have been doing that for thousands of years.”

Michelle almost didn’t make it to Israel. She applied for a May 2020 trip, just before her son was going to turn 18. But Covid threw a wrench in all travel plans, and the trip kept getting delayed.

As the months of isolation and anxiety dragged on, their cohort of 14 women whittled down to seven. But the group kept meeting, via Zoom, for two years.

At one point, Michelle also considered dropping out. She decided to attend one last Zoom session to say goodbye.

But as she looked around at the faces of the women she had gotten to know virtually, something shifted – and she changed her mind.

Maybe it was the learning, or the laughter, or the references to The Marvelous Mrs. Maisel, but Michelle knew she couldn’t say goodbye. “There was this bond that had grown and I thought, I need to go to Israel with these particular women,” she said.

Today, Michelle is the Membership Services Coordinator at Congregation Beth Israel in West Hartford, Connecticut and a Hebrew language tutor – and she found that her teaching instincts followed her naturally onto the Momentum trip.

At 64, she was older than the other participants on her trip, and had more experience reading Hebrew and understanding Jewish traditions. Often, when one was confused about a ritual or a historical fact, they’d say “Oh, go ask Michelle!”

“The Momentum team had said that each of us was going to have a higher power moment, and I felt like my higher power moment was helping my friends better understand what we were seeing,” said Michelle. “I loved being able to do that for them.” 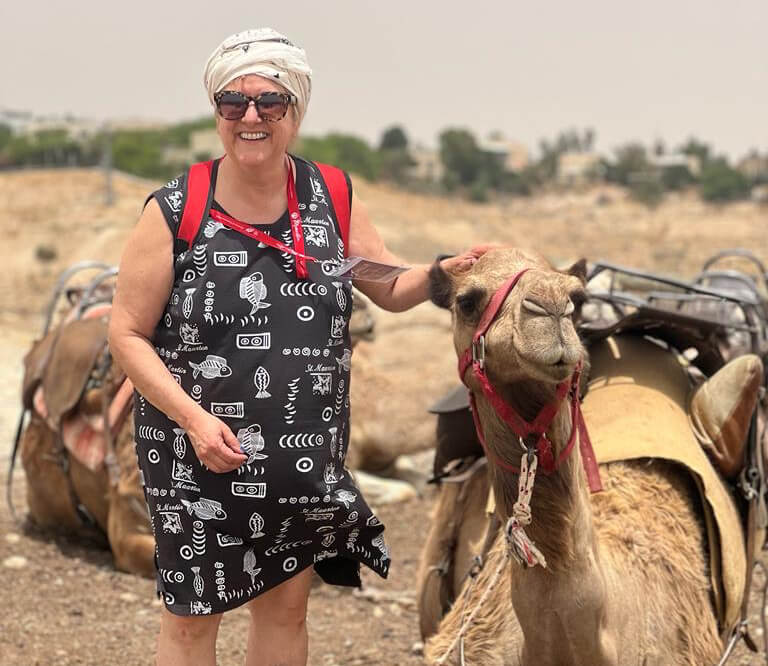 One of Michelle’s favorite teachings from the trip was on Day 3. As her group explored the mystical city of Tzfat, they learned about the Jewish value of shalom bayit – peace and wholeness in the home.

“The teacher, Nili Couzens, talked about the five levels of listening. The first level is interrupting, and I thought, oh my God, that’s me. I’m at the lowest level of listening!”

She found herself thinking about her current challenge: raising a teenager. “My son and I don’t ever have a conversation without interrupting each other. So that was a lightbulb moment: this is what I need to work on,” said Michelle.

The intensity of the eight-day trip meant that she didn’t act on every lightbulb moment right away. But Michelle said the MOMentum Year-Long Journey has been instrumental to her growth. Her cohort’s monthly meetings back home in West Hartford have helped her lean into the lessons they learned in Israel and make lasting changes.

One of those changes was determining what Shabbat would look like in her home. For Michelle, that meant holding off on household chores like cleaning and laundry, and indulging in a Saturday afternoon nap with her dog.

“That’s part of the brilliance of Momentum. It’s not necessarily what happens there, it’s also about what happens when you come back,” she said. “We are building a collective memory every month. Somebody will bring up something but maybe I didn’t hear it or see it that way, and now I’m looking at it through someone else’s perspective and learning something new.”

A longer trip than intended

After her Momentum experience in Israel, Michelle had decided to stay an extra week to decompress, explore, and visit friends. She was at the very end of that week when her routine Covid test came back positive – meaning she had to stay another week in Israel, quarantined at a seaside hotel in Netanya.

Since she was allowed to wander down to the nearly empty beach to read and walk, it was surprisingly relaxing – yet, there was a pit of anxiety in her stomach. “I’m a single mom and I work at a non-profit. I was on such a strict budget, and staying in a hotel for an extra week was not part of that budget,” said Michelle.

She was nervous about the unplanned expenses, and shocked at how expensive her new flight home would be – so she shared her worries with her new Momentum sisters in their group chat.

A bit later, her phone pinged. The group had taken up a collection and sent her more than $700 to cover some of her expenses.

“I told them, I never had a sister,” said Michelle. “But now I feel like I have eight!”

Date Night Disaster - All We Talk About Is the Kids

A Lovely Man Asked Me out, but Frankly, He Is Not a 'Professional' and Doesn't Make Much of a Living