Three years ago, Jenn Zussman’s daughters asked if they could celebrate Christmas.

“I was like, ‘Guys, I get it, I know it looks really fun – but we’re Jewish,’” said Jenn. “But they didn’t feel any connection to Judaism, and I was seriously struggling.”

She needed a way to bring Jewish values back into her home, and fast. “I had no idea how to be a Jewish mom, or how to infuse it into our family in a way that was fun and interesting and didn’t put them off.”

It was during the MOMentum Trip to Israel that Jenn determined what she wanted her Jewish home to look like – and exactly what she needed to do to make it a reality.

How to bring Jewish wisdom home

“I went in with a totally open mind,” said Jenn of her 2019 MOMentum Trip to Israel. She didn’t know any of the women on her trip – a cohort from LEV, a Momentum partner organization in Maryland – but she didn’t mind.

She wanted to spend those precious days in Israel focused on herself, without the distractions of family and work, asking soul-searching questions like, “Who is Jenn as a mom? Who have I become? Who do I want to become?”

“I went into the trip as vulnerable and as exposed as you can be, ready to just soak it all in,” said Jenn, “and it truly shifted everything.”

On the trip, Jenn realized that bringing Jewish to life in her home might not be as tough as she thought. “So many of the things I was already doing as a person, like giving back, were actually an extension of Judaism.”

When she attended fundraisers or fed her community, she was living Jewish values. When she taught her daughters to seek out people in need and ask, “How can I help,” she was showing them how to do the same.

“I was already doing it, but I didn’t attribute it to being Jewish,” said Jenn. “But once I made that connection, I was like, this feels good to me, it feels natural. I’m proud to say that I’m Jewish.”

“We don’t do lots of presents in our house, we do experiences instead. We talk about the things we want to do together as a family in the future – we trade presents for presence.”

The health scare that changed everything

Jenn’s husband Elie embarked on his own MoMENtum journey in the fall of that year – but only days after he came home, Elie experienced a health scare that shocked them both and put their newfound inspiration and motivation to the test.

Four days after he returned from Israel, Elie lost his eyesight. “I’ve known Elie since I was 20,” said Jenn, “and 20 years later, I’ve never seen him so scared.”

Jenn knew she needed to push through her own fear to take care of herself and her family. “I wanted to crawl under a rock and say, ‘Wake me up when he can see again,’ but that wasn’t going to happen. I needed to find strength ASAP, because I had two kids who were looking at me wondering how Mommy was going to handle this.”

Stepping up meant reaching out and calling in reinforcements. Jenn’s first call was to Devorah Buxbaum, founder of LEV and her Momentum Trip Leader. “I have never cried so hard in my life,” said Jenn. “I said to her, I don’t know what you need to do, but I need my Momentum sisters, I need you to be praying for me, and I need guidance right now.”

Jenn’s Momentum sisters rallied around the Zussmans, volunteering to make dinners, watch their daughters, and take care of errands while Jenn and Elie dealt with doctors. “Talk about being Jewish and showing your values – not just talking, but actually walking the walk,” said Jenn. “My girls immediately saw I had a group of sisters who were treating us like we were their family.”

“If I hadn’t gone on the trip, I probably would have lost my mind,” reflected Jenn. The following days were tense and frightening, but what she had learned in Israel guided her through. “I feel like Momentum – and Judaism – prepared me for this curveball. I was able to think, okay, how can Judaism guide me, and give me the strength and the toolbox I need to know that it’s going to be okay?”

“Hopefully, it doesn’t happen again,” said Jenn. “But if it does, or when the next thing happens, I’m not fearful like I used to be. I used to try to dodge bad things. Now, I’m ready for the next craziness to happen.” 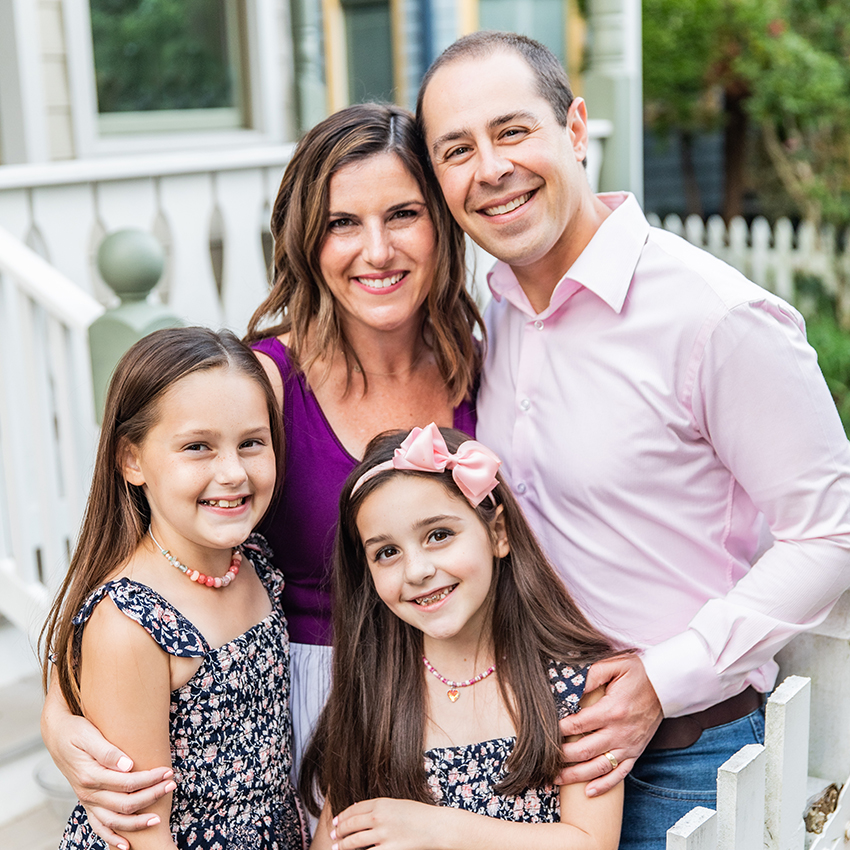 Who needs a Shabbat delivery?

These days, in Jenn and Elie’s house, Friday nights are special.

Along with their own Shabbat dinner, Jenn bakes six extra loaves of challah bread. As they eat, Jenn encourages her daughters to think about the people they know. Who had a tough week – or an awesome one? Who needs to be cared for? Who deserves a delicious surprise?

The girls package each challah with a note – Shabbat shalom! Love, the Zussmans – and deliver them to their chosen recipients.

Jenn still remembers something Adrienne Gold Davis, Momentum’s Director of Experience and Engagement said on her trip: Givers are happy people. “It’s one thing to say, ‘Hey guys, we need to be givers.’ But it’s another to actually practice it. And if I’m not doing it, I can’t expect my children to do it.”

Her children can see the difference giving has made in their lives. This week, as they went around the table saying things they appreciated about one another – another Shabbat tradition – Jenn’s younger daughter said, “I love seeing you help other people who need it. You never expect anything in return, you just love seeing them happy.”

That mindset of modeling Jewish values extends to Chanukah celebrations, too. For Jenn, Chanukah is an opportunity to reflect and learn.

“We talk about, ‘How can we take this story of Chanukah and apply it to who we are today? What’s the lesson?’ What I’m trying to teach my girls is that Jewish people are such warriors. How many times have we been persecuted, but we continue to grow?”

She also tells her daughters the story of Elie’s grandfather, a Holocaust survivor who found himself in the back of a truck on its way to Auschwitz, alongside his family. He was carrying papers that would allow him to cross the closed border – papers the rest of his family didn’t have. His own father encouraged him to jump out of the truck and escape to safety on his own.

She challenges her daughters to think about how that moment brings meaning to their own lives. “I tell them, ‘If your great-grandfather didn’t make that decision, none of us would be here today. So you need to figure out what gifts you have, and be the best person you can be – and share them.’”

Though her girls might occasionally yearn for piles of toys and gifts like other kids – a holdover from their old Christmas envy – Jenn and Elie take a different approach. “We don’t do lots of presents in our house, we do experiences instead. We talk about the things we want to do together as a family in the future – we trade presents for presence.”